History of the Mahaiwe

Today’s Mahaiwe Performing Arts Center was formed as a non-profit organization in 2002, but its story begins long before that. In 1904, a coalition of businessmen, led by John H.C. Church, in rising Great Barrington, MA, orchestrated construction of the Mahaiwe Theater and encompassing Mahaiwe Block. “Mahaiwe” (pronounced Muh-HAY-We) means “the place downstream” from the Housatonic River and is derived from the Berkshires’ original Mohican settlers. Designed by architect Joseph McArthur Vance, the structure replaced an earlier corner building on Castle and Main streets that burned down in 1901.

While the building — a three-story, French Renaissance Revival brick and marble giant — contributed to Great Barrington’s then-developing and now-celebrated look, the theater evoked an arts culture that defines an entire region. In 1905, the theater officially opened with live performances. At capacity, 1,000 patrons could attend the earliest Mahaiwe shows, among them John Philip Sousa and vaudeville acts. Silent films came around in 1914, followed by “talkies” in 1929. By the early ‘30s, the theater saw its first renovation, downsizing to 750 seats, and shifted its main focus to movies. Earl B. Raifstanger, Sr. managed the popular theater for several decades and long-term manager Al Schwartz carried operations through the latter part of the 20th century.

The theater faced prospective demolition and redevelopment when a cinema chain acquired it in 1988. However, in 1995, the beloved but aged Mahaiwe gained protection under the formation of Great Barrington’s Downtown Historic District and, in 2003, renovation under its present leadership began. Through it all, the theater has continuously run programs since its opening over 110 years ago.

Founder Lola Jaffe and a dedicated board and staff raised and invested over $9 million for the restoration project, upgrading infrastructure from floor to roof, including reconstruction of the original 1930s marquee. During this time, Lola — as she’s affectionately known — also secured the building’s listing on the National Register of Historic Places. Noted architect Hugh Hardy, Allegrone Construction and a team of talented artisans oversaw the historic project with great attention to detail. With comfortable seating and changes for the projection booth and accessibility ramp, the theater now seats just under 700. Work was completed in time for a Centennial Celebration in 2005, with the launch of year-round arts programming.

Since then, the Mahaiwe Performing Arts Center has steadily presented a thoughtful selection of music, dance, theatre, opera, talks, and movie classics. The Mahaiwe is a staple and a resource: its live performances inspire tens of thousands of audience members each year, its family and educational events are vital to the region, its embrace of modern technology supplements programming with live High Definition satellite broadcasts from around the world, and its year-round schedule enhances the quality of life for all those who reside in and visit the Berkshires. 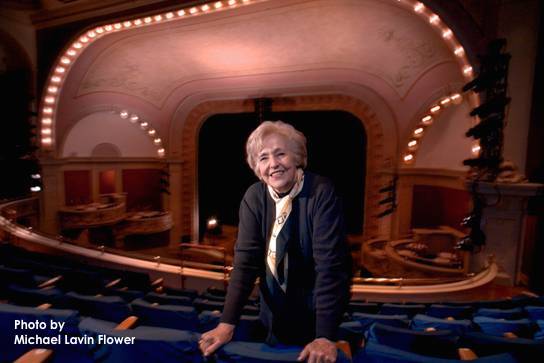 Lola Jaffe was the Founding President of The Mahaiwe Performing Arts Center, Inc., where she headed the campaign to restore the 100 year old Mahaiwe Theatre. Among her other cultural involvements, she was an Overseer Emeritus of the Boston Symphony Orchestra, the past Vice President and Treasurer of The Jaffe Foundation; a past member of the Board of Directors and Executive Committee at Jacob’s Pillow Dance Center in Becket, Mass.; past Chair of the Board of Directors of the Berkshire Opera, past Secretary of the Board of Directors of the American Friends of the Israel Philharmonic Orchestra, and a past board member of the Board of Directors of the America-Israel Cultural Foundation. In addition, Lola was named 2006 Person of the Year by the Southern Berkshire Chamber of Commerce, the 2007 Citizen of the Year by the Great Barrington Rotary, in May of 2008 she received an Honorary Doctorate from the Massachusetts College of Liberal Arts (MCLA), the 2010 ISPA (International Society for the Performing Arts) Angel Award and the 2016 Berkshire Museum Berkshire Award. A special focus of Lola’s was the establishment of ALFEA (Anne Levinson Fund for Experiencing the Arts) a program, in which Lola participated with Berkshire high school students, to expose them to the fine arts and performing arts through trips to New York City during the school year. The program is supported by a fund established by Lola and her late husband Edwin at the Berkshire Taconic Community Foundation.